The future of the Cayman Crown Coral Reef: Conservation and sustainable development

The Cayman Crown coral reef, discovered in 2014, is being studied thanks to the work of Ana Giró of Healthy Reefs Initiative and Ángela Mojica of Pixan’Ja. It is an extraordinary coral reef, located at the border between Guatemala and Belize. Since 2020, thanks in part to the efforts of Ana, Ángela and their colleagues, the area was declared a no-fishing zone for 10 years. This measure is absolutely necessary to help the conservation of an ecosystem so threatened by climate change and by human pressure. “In the monitoring we are conducting it appears that the number of commercial species of fishes are already very low in Cayman Crown. The coral health here is very good, luckily, but in terms of fishes the levels we see tell us that we are already looking at an ecosystem affected by overfishing,” says Ana Giró of Healthy Reefs Initiative.

In 2019 MARFUND financed a study to determine how fishermen used the area before the declaration of the no-fishing zone. According to this investigation, industrial fishing was not practiced like it is in the Pacific, but there was an abundance of artisanal fisheries. “Artisanal fishing is different from subsistence fishing and it can be large enough to cause overfishing in many areas” clarifies Ángela Mojica. Though studies showed that the area was likely never very important for local fishermen (because of its distance from the coast and due to the difficulties in reaching the site, which is not protected from the wind), the ecosystem still suffered a lot because of human interference and overfishing in the past years. Guatemalan fishermen are not the only people who were using the area. Fishermen from Belize and especially from Honduras also benefited from the coral reef. The transformation of this threatened treasure into a no-fishing zone clearly affects the community fishermen, especially in the areas of El Quetzalito and San Francisco del Mar in Guatemala.

“As scientists, we supplied the government with all the scientific information necessary to take action and protect Cayman Crown. We were not responsible, though, for the communication of these decisions to the communities. This has to be done by the institutions,” Ana Giró recognizes that the communication about the creation of the no-fishing zone was not very thorough: the institutions did not consult with local communities before prohibiting fishing activities, nor there was a concrete proposal for new economic activity. 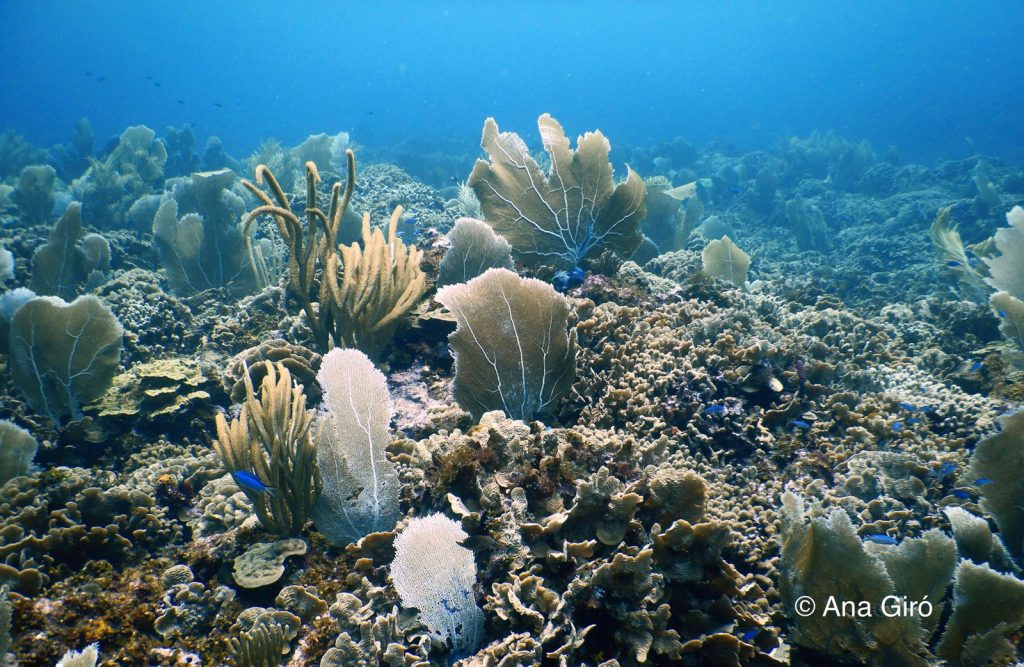 “It is a very complex problem. In any case, I think it is impossible to talk about sustainable development without talking about conservation, whether we are talking about corals, Arctic ecosystems, or tropical forests” explains Ángela Mojica. One thing, she says, does not exist without the other, and there are a lot of other environmental, political, and economical factors to be taken into account. A key issue, in Guatemala, is the lack of governance. “This does not mean having police everywhere, but rather having a better understanding of the resources available, better laws, better guidelines that can help us to use the resources we have better, and a better monitoring system.” According to Ángela, it is necessary at the same time to promote better education to change the behavior of all, from the communities to the highest levels in politics.

Providing access to fairer markets to local people who normally use the now-protected area is fundamental to promote conservation. “It is necessary to investigate which opportunities may exist for them, so that if they keep fishing, they can do it better, within the framework of fair regulations”. Guatemala still does not require fishing licenses, for example. “Fishing is a very neglected topic in Guatemala. To this day we still do not have fishing licenses. Fishermen are thus unable to identify themselves and dignify their profession or to ask, say, for a loan at the bank and prove that they are fishermen.” At the same time, and this is a global problem, at sea we often witness the tragedy of the commons: the sea is a resource that belongs to everyone and, therefore, to nobody. Therefore, people over-exploit it, putting their needs and their interests before the well-being of the ocean. Ana and Ángel, as researchers, are calling for more comprehensive and fair legislation to protect marine resources. “In the long-term, if these new rules are upheld and people really do not fish in the area, we hope that the ecosystem as a whole will be able to recover.”

As the two researchers suggest, the issue is very complex and has various layers, from the lack of a participatory public policy that involves the communities and the conservation of the ecosystem, to border disputes between Guatemala and Belize, to international problems like transnational illegal fisheries. On top of that, the global challenge of climate change critically endangers the coral reef because of the warming of the ocean and of its acidification. To monitor these threats, Healthy Reefs Initiative, Pixan’Ja, FUNDAECO, CONAP, and other organizations are working hard to study the variations in temperature and pH at the site. 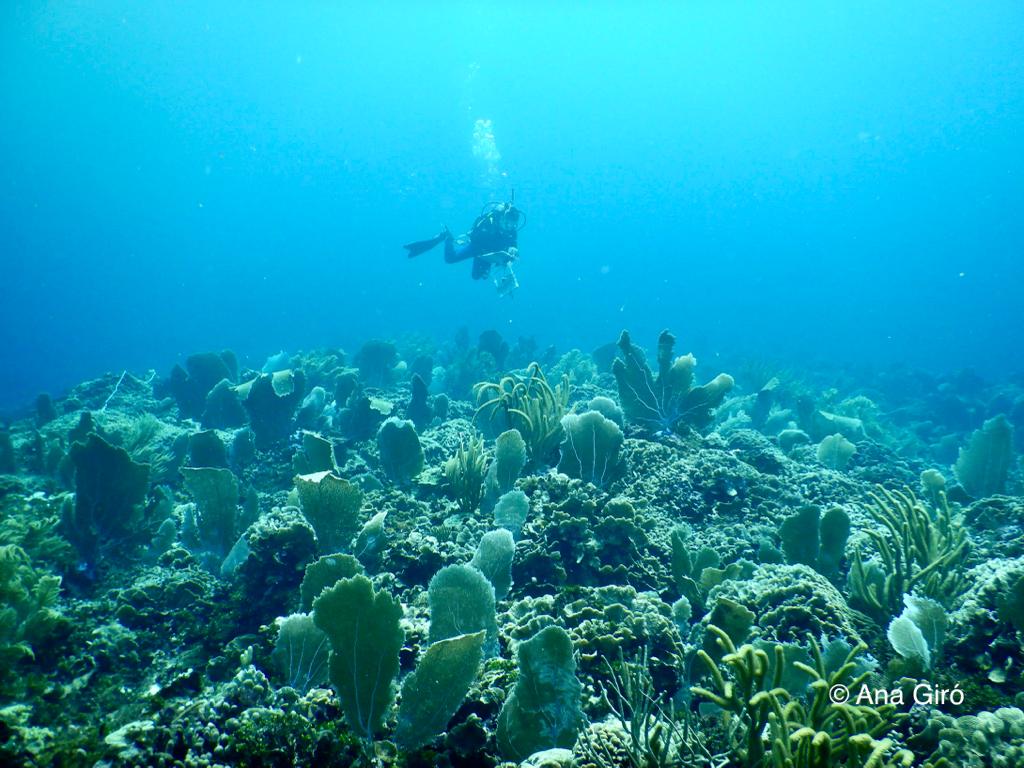 Recently, the project Cayman Extreme, financed by the Sustainable Ocean Alliance through the Ocean Solution Microgrant in 2020 y and the Ocean Leadership Microgrant in 2021, has been studying the potential impacts of extreme weather and climate events on this very vulnerable ecosystem. The primary goal of the project is to expand upon the monitoring efforts of researchers such as Ana and Ángela to identify potential long-term threats for the corals and the other species in the area. Through this study, it will be possible to take more effective measures for the conservation of the coral reef, ideally in partnership with local communities that are benefiting from the resources of the area.

A better and deeper involvement of the local communities is fundamental for a sustainable conservation of Cayman Crown. Truly sustainable conservation of the environment will only be possible if communities stop seeing conservation efforts as restrictions imposed from above and instead as a joint effort to adapt to climate change and to develop better living conditions. This will surely imply complex processes, which will require participatory workshops with the communities and the opening of spaces for dialogue among local fishermen, scientists, governmental institutions, NGOs, and others.

“We have to start a conversation among people with different scopes and economic activities working in the same area. How do we share the space so that we do not damage each other? And how can we conserve nature and its resources while living off and with them?”. Ángela Mojica and her colleague Ana Giró want to answer questions like these. Only through structural economic change based on scientific information will it be possible to implement conservation policies which are sustainable and just, both for the people and for the hidden treasure that is the Cayman Crown coral reef.

*This article is supported by the Sustainable Ocean Alliance and by the Ocean Leadership Microgrant.