We are the truth: The voice and journey of achí women

In Rabinal, the women began to talk about what had happened to their bodies. Remembering war is not an easy thing, as the pain of past wounds doesn’t come just from watching people die or communities disappear. War had touched all of them: both the mothers and the young girls.

During 1982 and 1983, Achí women faced an onslaught of sexual violence and domestic slavery. Their testimonies tell us of the abuses they faced at the hands of the Guatemalan Army and Civil Defense Patrols. Many of their abusers were neighbors or acquaintances from nearby communities.

In 2011, they decided to break their silence and file a case with the Public Ministry. 36 women reported the violence that they had faced. When the case was filed, they didn’t expect the proceedings to take long. However, the Public Ministry took seven years to bring the case to trial. The Public Ministry presented the accusations of only five out of the 36 women, pursuing only former Civil Defense Patrol members and leaving out soldiers and other perpetrators.

Since then, the women’s search for justice has been a long journey. On November 30, 2016, the Interamerican Court of Human Rights ruled that Guatemala had to remove the obstacles that supported the impunity of the perpetrators in this case and asked to reopen investigations of all acts of genocide committed against the Achí Mayan people. They were going to sanction those responsible for violations of human rights.

The Achí women had been waiting more than 40 years for justice. They met with many obstacles that perpetuated a cycle of impunity, such as the racism and machismo that grip the country, state structures, and the judicial system. For example, take the actions of Judge Claudette Domínguez, who let the accused go free and threw out the testimonies of the women. On the other hand, they faced revictimization in 2018. The case was closed in 2019, when three Patrol members were let off: Pedro Sánchez Cortez, Simeón Enríquez Gómez, and Félix Tum Ramírez.

At that point, public defenders in Rabinal, Lucía Xiloj, a K’iché Mayan; and Haydeé Valey and Gloria Reyes Xitumul, Achí Mayans; along with the 36 women continued the fight for justice, bringing the case to Judge Miguel Ángel Gálvez, who resolved to bring the accused Patrol members to trial for their crimes. 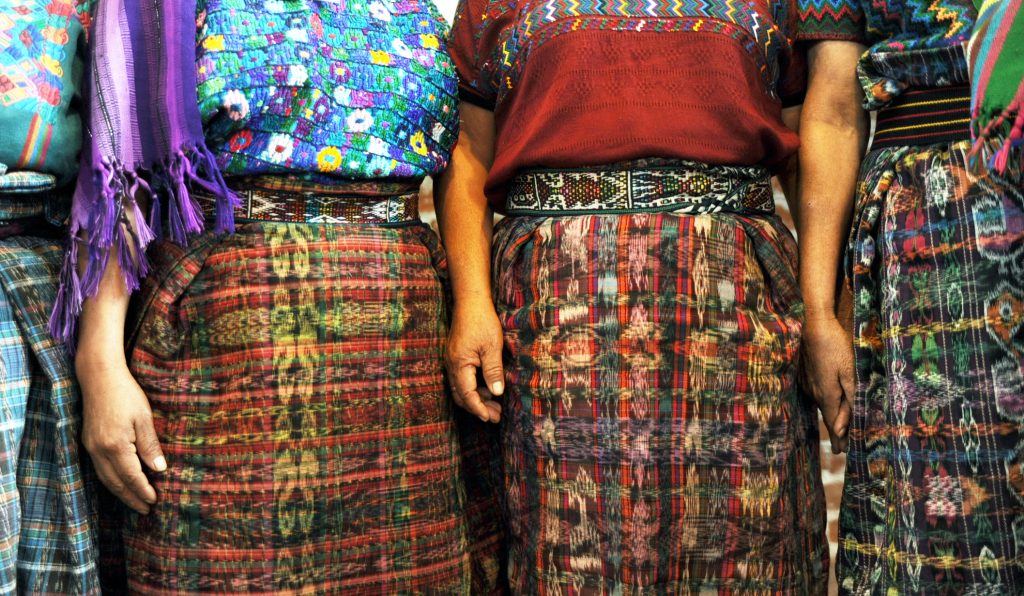 The case was assigned to the Court of Greater Risk A, presided by Jasmín Barrios. Witnesses revealed what happened through their testimony, and while the pain in their eyes was notable, so too was their desire for justice. Long days of trial began at 8am and were observed by 31 women who supported the five women whose voices represented what all of them lived through at the hands of the Patrols and soldiers.

Exhaustion, silence, tears, and at times anguish overcame the women as they listened to the testimonies yet again.

“They came and raped me. They muzzled me and hit me. I was pregnant and yet they pressed on my stomach…I suffered in the hands of all of the Patrol members,” said one of the plaintiffs.

The viewing gallery was silent after hearing what had happened. Through a screen, the accused listened to the crimes they had committed, but none wanted to testify to the court. They just said a few words saying that they, Benvenuto Ruíz Aquino, Bernardo Ruíz Aquino, Damián Cuxum Alvarado, Gabriel Cuxum Alvarado y Francisco Cuxum Alvarado, were innocent.

After these women were raped by these men, they ran into them for years in the community until this judicial process began. Fear was latent. They were not just afraid of the perpetrators themselves, but also their families. Despite this, the women viewed the trials with full attention, sometimes crying in indignation as the defense tried to disprove their testimonies.

Pedrina López, one of the youngest witnesses, told the story of how she was abused in her house on August 20, 1984.

“These two raped me when I was 12 years old…Benvenuto and Bernardo Ruiz Aquino raped me for two hours in front of my siblings. They robbed me of my childhood and took my parents away.”

After her testimony, Ms. Pedrina cried with her brother and aunt, who also testified in the trial.

“Benvenuto climbed up on my mother, grabbed her red necklace, and later she left, saying ‘goodbye my son, take care of your siblings.’ She did not come back. Benvenuto grabbed my sister, threw her on the bed, and raped her while she cried.”

According to expert testimony by Dr. Aura Cumes and others like Dr. Irma Alicia Nimatuj, about 94% of the rapes of Achí Mayan women were gang rape (where between 2 and 20 rapists assaulted them). The youngest victim was just 12 years old. Abuses described by witnesses ranged from torture to domestic slavery: the women were put to work by the military detachment that was stationed in the Chocoj community in Rabinal and were forced to feed the Patrol members and soldiers. The camp also became the site of torture.

One of the witnesses that was held in the camp testified the following:

“Both men and women were raped by the detachment. They hit us and cut us up…I heard the soldiers laughing, saying that everyone was going to get a turn, and they raped us”

During the trial, it was decided and proven that the Patrols were created by the Army, and in the case of Rabinal, there were Patrol groups that were armed by the Army. It was also proven that acts of sexual violence were committed as war crimes against humanity. These women were not victims of collateral damage, but rather a political attack, since the Patrols were agents of the State. They were directly responsible for the violence the women faced. 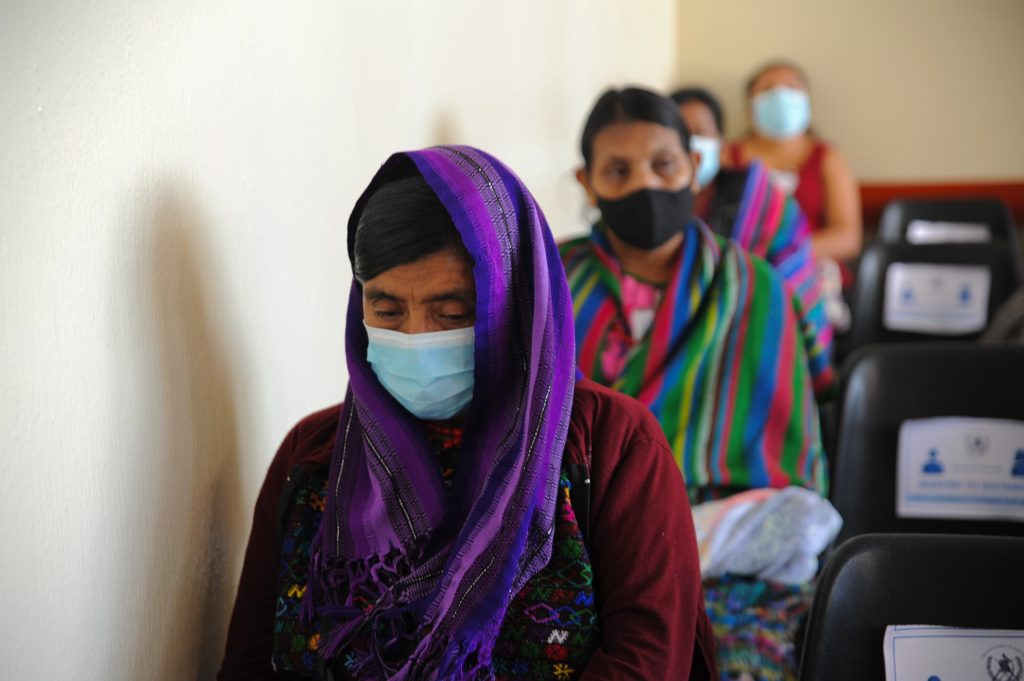 The trial took about three weeks, with the Court finally handing down its sentence on January 24th, 2022. As the sentence was read, the women waited with uncertainty and the hope that they would finally achieve justice for the survivors.

“We are the truth because the truth is in our hearts. What we want is justice. I feel good after testifying because I am the truth. We, the group, are here because we suffered, and what I suffered in my case is the truth and what I said in court was the truth…those men who we named are the ones who erred against us and our bodies,” said Pedrina López de Paz.

Pedrina and Margarita rose to speak and ask for justice in front of the Court before the sentencing. They were the voices of the 36 women. The sentence would be justice not only for the five women who testified, but rather for all the Achí Mayan women who were subjected to sexual violence and other abuses.

During this years-long search for justice, two of the 36 women passed away without seeing their abusers sentenced. However, this did not stop the fight, as we still have their testimonies. For the second time in the history of Guatemala, acts of sexual violence have been recognized and brought to court, demonstrating that they were used by the Army as a weapon during the Civil War.

The effort to see sexual violence recognized as a tool of genocide and weapon of war was first seen in the fight by Ixil Mayan women in a genocide trial. It was also seen when the Q’echi Mayan women argued the Sepur Zarco case. Now we see it in the case of the 36 Achí women who have held their position at the front of this dignified fight for justice. “This sentence is the start of the path forward,” they said.

“We want justice, not tricks. We want them to keep their word. The rapes and disappearances were unjust. We want them to keep their word and for there to be justice now.” “We don’t want what happened in our village to be the only case judged. We want justice for all the widows, orphans, and elderly women in all the villages across Baja Verapaz,” claimed Pedrina López and Maxima Emilina García as testimonies.

The sentence was handed down, and reparations were ordered by the Court on February 27. It was asked that the State recognize its role in the rapes committed by the Patrols and Army. In total, 19 reparatory measures were ordered. It was a dignified ruling.

It is important to mention the collaboration of organizations like Lagun Artean and the Agencia Vasca de Cooperación which helped to support media coverage of the case, raising awareness of the fight for justice for the women of Guatemala. The Achí women have been through a lot, and the path continues onward. The tenderness and love between them and their lawyers have been evident throughout this process, which shows the strength of these brave women. 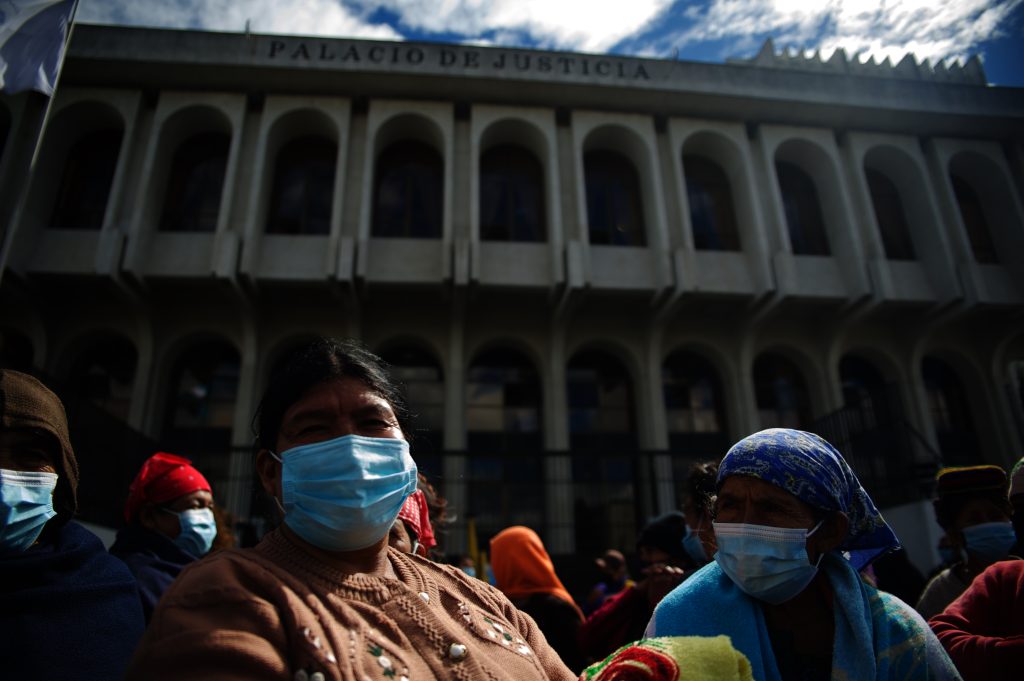